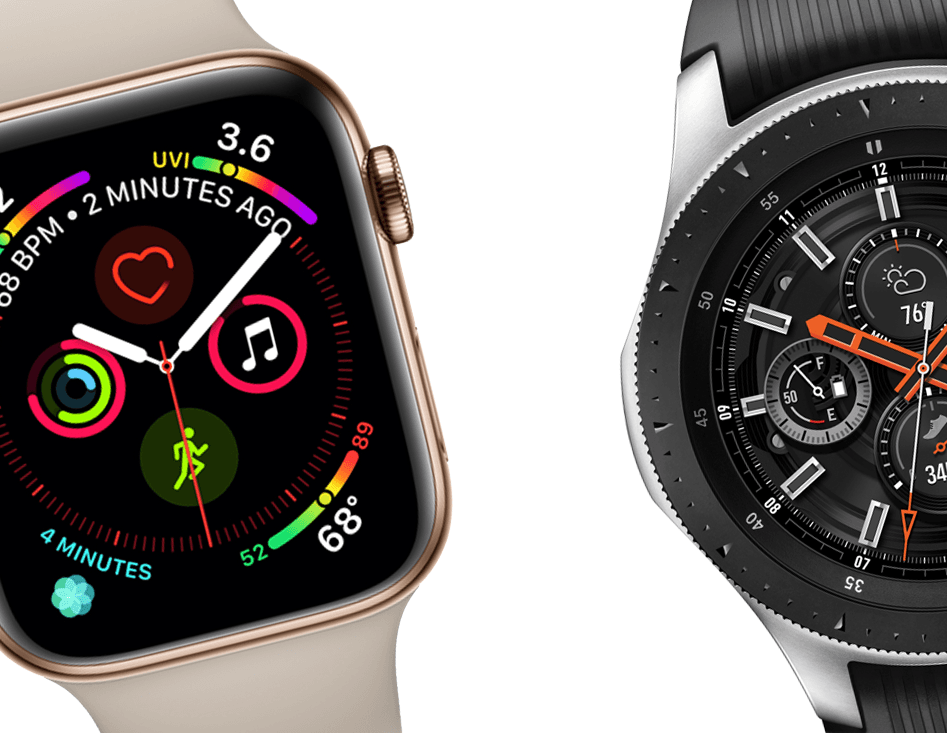 During Apple’s event in September 2018, the brand announced the addition of three new iPhone models and the Apple Watch 4. Since the release of Apple’s latest watch, many consumers are wondering which wearable is now at the top of its class – Samsung’s Galaxy Watch or the newest Apple Watch. To help make your decision on which smartwatch ranks number one, CPR has compared the Samsung Galaxy Watch vs. Apple Watch Series 4.

Whether you mainly use your smartwatch as a fitness tool or as an added gadget to keep you connected, there’s no denying both Samsung and Apple created great wearables. Consider the following specs and details to determine which model best suits you.

The Apple Watch Series 4 received a significant sizing upgrade. With narrower borders on the display, users can enjoy a viewing area that is 30 percent larger than previous models. The new model is also slightly thinner than the 3 Series and available in both 44mm and 40mm options. After selecting a size, users can choose between silver, space black, gold, and space gray.

Available in slightly larger options for those seeking a more significant display is the Galaxy Watch. The smallest size available measures at 42mm while the larger model just beats Apple’s watch at 46mm. For a further customized look, the Samsung Galaxy Watch is available in silver, midnight black, and rose gold; each with varying face displays depending on the finish chosen.

Both the Apple Watch 4 and the Galaxy Watch boast extensive capabilities. While both watches offer fitness features such as heart rate monitors, step tracking, and exercise options, each device has its own unique flare.

The Apple Watch Series 4 is the first wearable to offer electrocardiogram capabilities (ECG or EKG). With this technology, users can track their EKG and even save a PDF of their results for future doctor visits. The US Food and Drug Administration has cleared the technology, adding to its credibility.

While Apple focused on in-depth health measurements, Samsung developed a watch with comprehensive features for tracking physical activity. The Galaxy Watch comes with stress management features and a collection of 60 workouts you can log.

The Apple Watch Series 4 is designed to last an estimated 18 hours on a full charge – the same battery life of the Series 3. Depending on your uses for your wearable, this may be plenty of juice. However, Samsung’s Galaxy Watch is the clear winner regarding battery life with a whopping four days of power packed in each full charge. If you see yourself wearing your watch throughout both the day and night, consider how often you ideally are okay with reaching for the charger.

Like the rest of the Apple’s line of products, the Watch Series 4 pairs beautifully with other iOS gadgets. Though many are impressed with the latest model, Apple’s watches are only compatible with other iOS products. In comparison, Samsung’s Galaxy Watch is compatible with both iOS and other Android devices. However, users will have the best experience when pairing it with other Android products rather than iOS devices.

Both Apple and Samsung designed some of the market’s greatest wearable gadgets. However, when it comes time to decide which smartwatch is for you, be sure you consider your current smartphone, battery expectations, and overall design preferences. Though the Galaxy Watch is iOS-compatible, those who are already Apple product owners should likely choose the Apple Watch Series 4 to get the most out of their experience. On the other hand, those who prioritize battery life over a slimmer design might be happier with the Samsung Galaxy Watch.

Still can’t choose between the Samsung Galaxy Watch vs. Apple Watch Series 4? Whether you’re Team iPhone or Team Samsung, the technicians here are prepared with fast, reliable repair services and solutions. To get in touch with us about a broken device, find your nearest store location.